Skip to content
Home |Philosophy|Heraclitus: The only constant is change

Heraclitus is one of my favourite philosophers. His small book Fragments

is easy to read and fundamental to understand. His core teaching that the only constant in life is change was crucial in my future outlook with Motor Neuron Disease (ALS). It meant that just as my health status changed towards a bleak future, it also meant the possibility that stability and recovery were possible. More important, however, was the eventual understanding that an inevitable bad hand was going to be dealt: I just got it sooner than expected. If you feel stuck or torn between two ideals, take solace in Heraclitus’ wisdom. See reality as an ever-changing process that drives everything around you, including yourself.

Influenced by: Parmenides, Pythagoras, Hesiod and Homer.
Was an influence on: Socrates, Plato, Aristotle, Stoics, Hegel, Schopenhauer, Nietzsche and Heidegger

535 – 475bce
Pre-Socratic. Around at same time as Pythagoras, Confucius and the Buddha.

Born in Ionia, lived in Ephesus.

Heraclitus wrote three volumes on philosophy and politics but left them at the temple of Artemis. They were lost and all we have is a collection of thoughts and quotes collected in a work titled Fragments 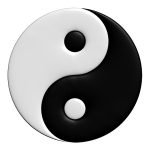 Heraclitus’ philosophy is analogous to the Taoist concept of Yin and Yang: transmuting opposites that comprise the whole. He observed that everything was in a state of flux—in constant change. Change was the only constant, therefore, there are no unchanging objects, only processes. All change is One, and the One is change. Day turns into night and night into day; life dies and death births life. Existence comprising of processes rather than objects still holds up today, and modern science has been unable to disprove it. Even atoms decay through radio-activity, and electrons pop in and out of existence at the quantum level. In essence, absolutely nothing is permanent, stable, predictable or constant throughout the universe, except Change itself. His most famous quote “You can’t step into the same river twice” is an astute observation and analogy for existence. The river is considered a thing (a body of water) that one can point to, swim in, sail on and capture in artistic form. However, the river is an ever-changing process. The moment you step into the river, the waters that touched your foot have changed; as has the landscape of the sand you stepped on. Although the river is a linguistically singular object, its reality is a constant change of form and substance. It changes itself, what it touches and is changed by what touches it.

Personally, I find Heraclitus a genius for discovering such a profound truth 2,500 years ago, despite the most significant minds around him stating the opposite. So why is seeing everything as constant change so important? For me, it offers genuine hope in the face of any adversity: the certainty that things will change and the possibility that they change favourably. Moreover, when changes take a turn for the worst, I won’t be taken aback or shocked. Accepting the worst will probably happen is a relativity issue between my perception and the reality in front of me. Understanding, acceptance and expectation of change raises me from a feeling of entitlement to a foreshadowing of caprice in fortune’s temperament. I have a mantra that my assistant must be sick of hearing by now: Hope for the best but prepare for the worst. Implicit in the phrase is an expectation that fortune can change any moment, all I can do is accept its inevitability and prepare for it the best way I can.

In business, that means that if there’s a spike in sales I’ll remember that it won’t last; soon, sales will be back to normal or sluggish. Financially, if I have money in the bank it doesn’t mean I can buy something, it means a safeguard against the unexpected bill, repair, etc. Relationally, peaks and valleys spread across the landscape of friendships, family and partners. Personally, a bad day, week, month or year is inevitable; it’s good to remember those other good periods in the past and understand the pendulum will swing back again. A mistake we often make is being continuously surprised at changes of fortune and the catastrophes in the world around us. Perhaps it’s a lack of historical understanding; an ignorance that the worst and the best one can possibly imagine have already repeatedly occurred in every society and age.

Accepting that reality is change and that we are part of that reality has many psychological advantages too. I find myself inseparable from the world around me. Often, life can feel like we are two separate entities coexisting. Yet, the truth is I was born from this world, not into it. I am “it”. As are you. The same force that courses through our universe is the same coursing through your veins; we are of the universe, not in it. You and I are the change in our environment as the environment is on us. We are inextricably connected to everything. As Carl Sagan famously taught us, We are Stardust—literally. We exist because of the atomic particles flung across space from an exploding sun billions of years ago and millions of light-years away.

In a way, Heraclitus seems to affirm Fate in his philosophy. There is a process that started billions of years ago and through an infinite number of variables, events, disasters and miracles, you and I have come to exist. Those countless changes allowed us the fortune to be part of the change that will create the future. We’re not nouns, we’re verbs. I am is a misnomer. I am-ing is more accurate. We are not unchanging things, we are variable constantly changing processes. I’m sad, but soon I won’t be. I may be broken, but someday I may be repaired. I’m alive now, but eventually, I won’t be. Once I’m dead, it won’t be long before some “I” will be born again. Change is coming my friend, and so is hope.

The following 10 questions get you to think about Heraclitus’ philosophy and how you can put it to use. Take your time and write down the answers if possible; you may want to look at them in the future to compare what changes happened.